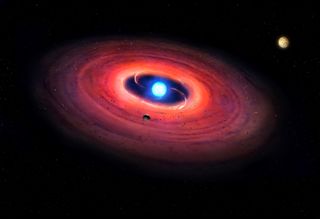 An artist’s depiction of rocky material and a metallic, spherical core both orbiting a white dwarf, with an Earth-like planet in the background.
(Image: © University of California, Los Angeles/Mark A. Garlick/markgarlick.com)

By analyzing the disintegrated remains of distant worlds consumed by their stars, a new study finds that at least some rocky exoplanets may have interiors similar to those of Earth and Mars.

Previous research found that most rocky bodies in our solar system formed amid high levels of oxygen, about 100,000 times higher than what is found in the sun’s hydrogen-rich gas. Such oxidation likely reflects the primordial conditions that existed during the earliest stages of rock formation around the sun. Those first rocks ultimately built asteroids, moons and planets.

It remains unclear whether the kind of chemistry seen in the solar system’s rocks is typical of planetary systems overall. After all, scientists have yet to bring back rock samples from a neighboring planet such as Mars, much less an exoplanet circling a distant star.

Now, researchers may have found a way to probe the chemistry of distant planets — by analyzing the remains of worlds that crashed into white dwarf stars.

White dwarfs are the dim, fading, Earth-size cores of dead stars that are left behind after average-size stars have exhausted their fuel and shed their outer layers. Our sun will one day end up as a white dwarf, as will more than 90% of all stars in our galaxy.

White dwarfs are incredibly dense (just a teaspoon of matter from a white dwarf would weigh 5 tons, or 4.5 metric tons), which gives them powerful gravitational fields for their size. Prior work has suggested that elements heavier than helium would rapidly sink below the surfaces of these stars under the influence of that powerful gravity. However, astronomers have also previously identified some white dwarfs with atmospheres polluted by heavier elements, including silicon, magnesium, iron, carbon and oxygen, likely the remains of rocky exoplanets and asteroids that collided with those dead stars.

So, the scientists behind the new research gathered the light given off by six of these polluted white dwarfs. Researchers can use the distribution of wavelengths present in such light to calculate what elements are present; so in the case of these polluted white dwarfs, the team could measure how abundant oxidized iron was in rock that had fallen into the dead stars.

“This is the most precise way of measuring the geochemistry of these rocky bodies that we have right now,” study lead author Alexandra Doyle, an astrochemist at the University of California, Los Angeles, told Space.com.

The researchers found that when it came to oxygen, the rocky bodies that had orbited these white dwarfs had chemistries similar to those of Earth, Mars and asteroids in our solar system, but unlike that of Mercury.

“These findings enhance the prospects that there are Earth-like rocky bodies out there,” study senior author Edward Young, a cosmochemist at the University of California, Los Angeles, told Space.com.

The scientists now plan to analyze more white dwarfs to get a better picture of what exoplanets are like.

“We think we’ve seen signs of extrasolar bodies like Earth, Mars and some of the asteroids in the solar system’s asteroid belt, but there may be hints of bodies like Mercury in the data as well,” Doyle said.

The researchers detailed their findings in the Oct. 18 issue of the journal Science.