This is the story of Mrs. T. She is a 90-year-old tortoise from Pembroke, Wales. While hibernating in the garden, Mrs. T the tortoise ran into a little trouble. Rats chewed off her two front legs. They chewed all the way up to the elbow joint. When her owner, Jude Ryder, found her, she rushed Mrs. T to the animal hospital. After a good amount of money (roughly $13,000) was spent to help her recover, Mrs. T was still in pretty bad shape. She still could not walk. Then something remarkable happened. Jude’s son, Dale, came to Mrs. T’s rescue. When Dale was 8 years old, he had received Mrs. T as a gift. Back then she was already well into her 60’s. So at this point in time, they had a history, a relationship if you will. And he was not about to let her suffer.

Dale today is a 37-year-old mechanical engineer. He glued wheels from a model aircraft onto Mrs. T’s shell.  Can you see where this is going?

That’s right, she is now the fastest turtle in Wales! “It was like fitting her with a turbo charger – she’s going double the speed she used to,” said Jude

“Mrs. T is still quite young for a tortoise. She could go on for another 50 years – all she needs is a new set of tires every now and again,” Jude said.  Rat attacks on tortoises are not an uncommon occurrence. Britain’s oldest tortoise died at 130 years old after being bitten by rats in 2013. 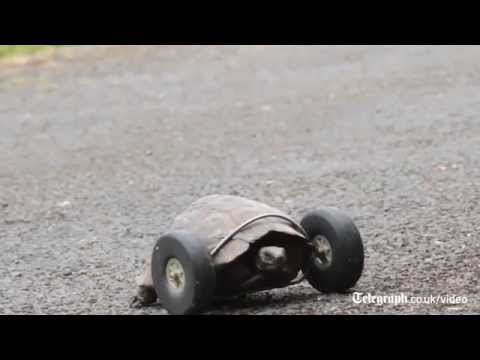 Thankful that her pet’s ordeal is over, Jude said: “We were afraid she may have to be put down, but her new set of wheels have saved her life. She has the run of the garden again and we can always find her because she leaves very strange tracks behind wherever she goes.”

Apparently it is usually dogs and foxes who carry out tortoise attacks in hibernation. Sometimes a tortoise can get by with three legs but with only two legs often times they are put down. Considering what long lives they are able to live, giving them a set of wheels is a great option. There is even one very creative veterinarian in Germany that gave a disabled tortoise the ability to walk with the assistance of a tiny Lego wheelchair he made. That tortoise’s name is Blade, and I am betting all the other tortoises in town are very jealous. After reading this you might feel a little animosity towards those rats that hurt Mrs T. Well not all rats are so bad.