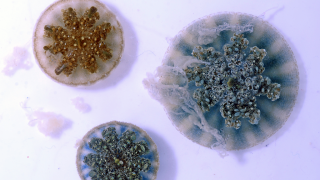 Mucus produced by these upside-down jellyfish can be seen floating above their frilly arms.
(Image: © Allen Collins and Cheryl Ames)

Upside-down jellyfish pulse on the ocean floor, their frilly arms stretched skyward as they release venom-filled blobs of mucus into the surrounding water, where the slime “stings” passing swimmers, new research reveals.

These jellyfish (Cassiopea xamachana) look like strange, squidgy plants stuck to the ocean floor, and they tend to assemble in groups that resemble bizarre flower beds. Upside-down jellies can be found living in the mangrove forests and lagoons of southern Florida, Hawaii, the Indo-Pacific Ocean and the Caribbean, according to the Monterey Bay Aquarium. Snorkelers who visit those areas sometimes develop a strange itching sensation on their skin, as if the water itself stung them.

“You start to feel this tingling … More than just itchiness, like when an itch turns into a painful discomfort,” said Cheryl Ames, a museum research associate and an associate professor of applied marine biology at Tohoku University in Japan.

But until now, nobody knew the actual cause.

In a new study published today (Feb. 13) in the journal Communications Biology, Ames and her colleagues finally cracked the case: From these upside-down jellyfish’s spot on the seafloor, they deploy an arsenal of cellular bombs armed with stinging cells called nematocytes. When the bombs make contact with a passing swimmer, they release venom that irritates the skin. If a bomb bumps into a tiny brine shrimp, one of the upside-down jellies’ favorite snacks, its venom kills the animal on contact.

Those familiar with stinging water may have heard of so-called sea lice, creatures often blamed for the painful sensation associated with upside-down jellies. Sea lice are parasites that prey on fish, but the term serves as a colloquial “catchall” for anything that causes water to sting, Ames said.

None of the proposed explanations held up to scrutiny. “We initially thought that there would maybe be some tentacle bits from other jellyfish” floating through the water, perhaps detached during a massive spawning event, as can happen, Ames said. Another theory posited that jellyfish still in their larval stage (and thus microscopic) might float through the water and sting people. But researchers have visited the habitat so many times and never seen the adult stage of that hypothetical larval jelly, she added.

With the mystery still unsolved, the scientists realized that, whenever they were stung, they were swimming near upside-down jellyfish at low tide, while the jellies pumped out murky clouds of mucus. To find out if these oddball jellies were the culprit, the researchers looked at samples of the jellies’ mucus under high-resolution microscopes. They spotted tiny, jelly-filled spheres floating within the fluid that appeared to be packed with cells and algae.

“We were really kind of in awe and shock, and saying, ‘What are these? Has anyone seen these?'” Ames said. “None of us could figure out immediately what they were.”

The team uncovered one stray study from 1908 that mentioned the strange spheres, but those researchers had wrongly identified the structures as parasites of the jellyfish. By analyzing the molecules and proteins in the spheres, Ames’ team confirmed that the spheres came from the jellyfish and were dispersed from spoon-shaped pads on the animals’ arms.

A minefield of mucus and toxic “bombs”

Stinging cells called nematocytes coat the outermost layer of the bumpy spheres; when touched, these cells leak venom from long, stringy structures on their surfaces, stinging unwary creatures that run into them. In addition to stinging nematocytes, cells covered in hairlike threads called cilia stud the surface of the spheres. These cilia wave in the water and act as tiny propellers that send the spheres spinning off in every direction. The team named the free-wheeling spheres “cassiosomes,” after the Cassiopea genus.

“The discovery of motile, nematocyte-containing cellular structures … in Cassiopea demonstrates an unexpected way of organization,” Tamar Lotan, head of the Department of Marine Biology at the University of Haifa in Israel, told Live Science in an email.

“Nematocytes are found mostly on the jellyfish tentacles,” said Lotan, who was not involved in the new study. “However, this upside-down jellyfish actually builds a [minefield] around itself, a defense layer of mucus that contains these cassiosome bombs.”

So, how can you avoid swimming through a toxic minefield on your next trip to the Florida Keys?

“When it’s low tide … obviously, there’s less water around — and you’re closer to the jellyfish, and you’re more likely to disturb them,” said co-author Allen Collins, a zoologist at the Smithsonian’s National Museum of Natural History and the National Oceanic and Atmospheric Administration’s National Systematics Laboratory. We don’t know yet if upside-down jellyfish release more cassiosomes in response to certain disturbances or at certain times of the day, Collins added.

So, if you see upside-down jellies while you’re swimming, it may be best to admire the squishy creatures from a distance to avoid floating through their snotty clouds of stinging spheres.