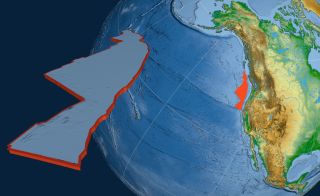 A gaping hole in a dying tectonic plate beneath the ocean along the West Coast of the United States may be wreaking havoc at Earth’s surface, but not in a way most people might expect.

This gash is so big it may trigger earthquakes off the coast of Northern California and could explain why central Oregon has volcanoes, a new study found.

The researchers in the new study aren’t the first to suggest that the Michigan-size Juan de Fuca (pronounced “wahn de fyoo-kuh”) plate has a tear. But thanks to a new, detailed dataset, they’re the first to say so with certainty. [The Science of Plate Tectonics and Continental Drift (Infographic)]

“Where other people had debated whether or not it [the tear] was there, we can pretty confidently say that it’s real,” study lead researcher William Hawley, a doctoral student in the Earth and Planetary Science Department at the University of California, Berkeley, told Live Science.

The Juan de Fuca plate is long, stretching about 600 miles (1,000 kilometers) along the Pacific Northwest coast, from Vancouver Island, Canada, to Cape Mendocino, California. “No part of it is above the water. It’s a total oceanic plate” that’s subducting, or diving beneath another plate, in this case the North American plate (a continental plate), Hawley said.

From 2011 to 2015, scientists boated out over different parts of the Juan de Fuca plate, dropped ocean-bottom seismometers underwater and let these sensors collect seismic data from earthquakes all over the world for a year.

Scientists aboard the R/V Thomas G. Thompson recover a seismometer, part of the Cascadia Initiative, off the coast of Oregon and Washington. This instrument spent a year on the seafloor, recording earthquakes from all over the world.
(Image credit: William Hawley)

When the year was up, the researchers returned, fished up the seismometers and uploaded the data, which allowed them to create a tomography, or layout, of the plate. Then, they deployed the devices to other spots on the plate. “It was an enormous community effort,” Hawley said.

The data from these seismometers showed how seismic waves traveled through the plate, which, in turn, revealed information about the plate’s composition and varying temperatures. One region under central Oregon showed a gap in high-velocity seismic waves, which Hawley interpreted to be the hole.

But why does this hole exist? Hawley and study co-researcher Richard Allen, director of the Berkeley Seismological Laboratory, hypothesized that there is a weak zone in the Juan de Fuca plate that exists because the plate formed at two overlapping ridge segments. As this weakened zone of the oceanic plate goes under the continental plate, it unzips from the bottom up (from the underside upward), creating a gash.

“This tearing may eventually cause the plate to fragment, and what is left of the small pieces of the plate will attach to other plates nearby,” the researchers wrote in the study. In other words, “we’re witnessing the death of a plate,” but it will take at least a few million years to die, Hawley said.

Hawley and Allen estimated that the hole is located at a depth of between 155 and 60 miles (250 and 100 km). The tear itself, which is narrower on top and widens with depth, is about 120 miles (200 km) wide. [Hidden Undersea Mountains Uncovered with Satellites (Photos)]

Moreover, it appears that material is getting pushed up through the tear, which may have led to the formation of the volcanoes in central Oregon’s High Lava Plains about 17 million years ago, Hawley noted. In fact, it’s incredible how many geographical and seismic features in the Pacific Northwest fit into the researchers’ hypothesis, he said.

The research is a “thought-provoking idea paper,” said Ray Wells, a research geologist emeritus with the U.S. Geological Survey in Portland, Oregon, who was not involved with the study.

The study was published online July 11 in the journal Geophysical Research Letters.