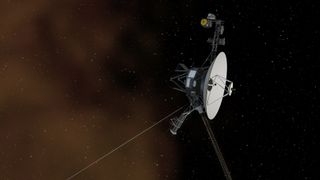 An artist’s depiction of one of the twin Voyager spacecraft exploring interstellar space.
(Image: © NASA/JPL-Caltech)

Voyager 2 is taking the measure of its exotic surroundings once again.

On Jan. 25, the venerable probe, which has been exploring interstellar space since November 2018, failed to execute a spin maneuver as intended. As a result, two onboard systems remained on longer than planned, sucking up so much energy that Voyager 2 automatically shut off its science instruments.

Mission team members expressed confidence at the time that they could troubleshoot the problem, and their confidence has been borne out: Voyager 2’s science gear is back up and running, NASA announced Wednesday (Feb. 5).

“Mission operators report that Voyager 2 continues to be stable and that communications between Earth and the spacecraft are good,” agency officials wrote in a mission update yesterday. “The spacecraft has resumed taking science data, and the science teams are now evaluating the health of the instruments following their brief shut-off.”

Voyager 2 and its twin, Voyager 1, launched a few weeks apart in 1977 to perform an unprecedented “grand tour” of the outer solar system. Both spacecraft conducted flybys of Jupiter and Saturn, revealing a great deal about the solar system’s two biggest planets. Voyager 2 then zoomed past Uranus in 1986 and Neptune in 1989; the probe remains the only craft to have gotten up-close looks at either of these “ice giants.”

The two spacecraft are still going strong after more than 42 years in space, but they can’t keep up their pioneering work forever. The radioisotope thermoelectric generators that power the Voyagers are running low on juice and will likely be tapped out by the mid-2020s, NASA officials have said.

Voyager 1 and Voyager 2 are currently about 13.8 billion miles (22.2 billion kilometers) and 11.5 billion miles (13.5 billion km) from Earth, respectively. It takes more than 17 hours for light to travel from Earth to Voyager 2, meaning that mission team members have to wait a day and a half to see if their commands work.