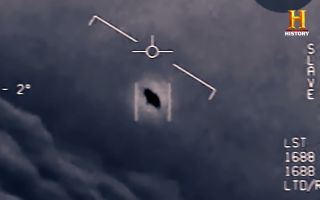 Between 2014 and 2015, seasoned pilots in the U.S. Navy experienced a number of harrowing encounters with UFOs during training missions in the U.S. While pilots were mid-flight, their aircraft cameras and radar detected seemingly impossible objects flying at hypersonic speeds at altitudes up to 30,00 feet (9,144 meters); these mysterious UFOs did so with no visible means of propulsion, The New York Times reported on May 26.

However, none of the pilots suggest that these perplexing UFOs represent an extraterrestrial invasion, according to The Times, which previously wrote about Navy pilots encountering UFOs in 2004.

In total, six pilots who were stationed on the aircraft carrier U.S.S. Theodore Roosevelt between 2014 and 2015 told The Times about spotting UFOs during flights along the southeastern coast of the U.S., extending from Virginia to Florida. [7 Things Most Often Mistaken for UFOs]

Two of the pilots who spoke with The Times about the inexplicable sightings share their stories in the new History Channel documentary series “Unidentified: Inside America’s UFO Investigation,” premiering May 31.

Video of two aerial encounters appears in the series, showing clips of UFOs: one tiny white speck and one large, dark blob. These UFOs later came to be known respectively as “Go Fast” and “Gimbal.”

The objects had “no distinct wing, no distinct tail, no distinct exhaust plume,” Lt. Danny Accoin, one of the Navy pilots who reported UFO sightings beginning in 2014, said in the documentary.

“It seemed like they were aware of our presence, because they would actively move around us,” Lt. Accoin said.

According to Lt. Accoin, when a strange reading shows up on radar for the first time, it’s possible to interpret it as a false alarm, “but then when you start to get multiple sensors reading the exact same thing, and then you get to see a display, that solidifies it for me.”.

Accoin told The Times he encountered UFOs twice, during flights that were a few days apart. He also said that though tracking equipment, radar and infrared cameras on his aircraft detected UFOs both times, he was unable to capture them on his helmet camera.

Lt. Ryan Graves, an F-18 pilot, said in the documentary that a squadron of UFOs followed his Navy strike group up and down the eastern coast of the U.S. for months. And in March, 2015, after the Roosevelt was deployed to the Arabian Gulf, Graves said the UFOs reappeared.

“We did have issues with them when we went out to the Middle East,” Lt. Graves said.

Pilots who spotted the UFOs speculated among themselves that the unnerving objects may have belonged to a highly classified drone program using unknown technology, and they did not consider them to be extraterrestrial in origin, The Times reported. T

Lt. Graves and others are speaking out now because what they saw raised concerns for them about their comrades and national security, Christopher Mellon, a former Deputy Assistant Secretary of Defense for Intelligence, told the History Channel.

In 2015, following this spate of UFO sightings, the U.S. Navy issued official guidelines for personnel to report and investigate aerial objects, according to The Times. Those Navy protocols were updated earlier this year; all data will be classified information and will not be made available to the general public, Live Science previously reported.