The U.K.’s Ministry of Defense will publish secret UFO reports for the first time. 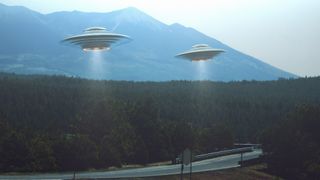 The U.K.’s official government investigation of UFOs can be traced to a group formed in 1950: the Flying Saucer Working Party.
(Image: © Shutterstock)

From the early 1950s until 2009, a department in the United Kingdom’s Ministry of Defence (MoD) documented and investigated reports of UFOs. Now, more than a decade after the program ended, many of those formerly classified files about UFO sightings will be made available to the public for the first time.

Previously, some MoD files about UFOs had been published online at the U.K. National Archives website, The Telegraph reported. However, all of the agency’s UFO reports will be released this year on “a dedicated gov.uk web page,” a spokesperson for the British Royal Air Force (RAF) told The Telegraph.

The decision came after PA Media, a British news agency, filed a request for the UFO files under the Freedom of Information Act, according to The Telegraph. MoD officials decided “it would be better to publish these records, rather than continue sending documents to the National Archives,” the RAF spokesperson said.

The U.K.’s fascination with UFOs spiked around 1950, prompting the MoD to form the Flying Saucer Working Party to address the phenomenon, according to the U.K. National Archives. UFOs in the early 1950s even captured the attention of Prime Minister Winston Churchill, who sent a memo to his air minister in 1952 asking, “What does all this stuff about flying saucers amount to? What can it mean? What is the truth?”

The flying saucer group concluded that UFOs were hoaxes, delusions or ordinary objects that were misidentified, recommending “that no further investigation of reported mysterious aerial phenomena be undertaken.” Nevertheless, other MoD divisions continued the work of official UFO investigation in the U.K., ushering such efforts into the 21st century, The National Archives reported.

The last UFO report to be published online by the MoD dates to 2009, covering sightings that took place from January through the end of November of that year. These included “a silver disc-shaped light” (reported in January 2009), “up to 20 orange and red glowing lights” (reported in June), “a large bright silver/white ball/sphere” (reported in July) and “three blazing gold orbs in a diagonal line in the sky” (reported in September).

After MoD enacted a policy change on Dec. 1, 2009, the agency no longer recorded or investigated UFO sightings, according to the report. But what they did find — including many recent UFO reports that were previously available only as hard copies — will be published online within the next few months, said Nick Pope, a former UFO investigator for the MoD.

“There should be some interesting nuggets in these new files,” Pope told The Express.